Photos By Glenda Such on Such A Site

This page contains enlargements of the photos taken by Glenda Such (me) which shown much smaller on my website.

This page of my photos will contain approximately one photo per page. To view the next photo, use the down arrow or page down on your computer, and if you are on a device such as a cell phone, or other devices like the iPad, use the scroll down button to see the next photo on this page on my site. If using voiceover, just flick left to right to go to the next photo. If using a screen reader and you hear the dashes between each word which describes the image, your punctuation settings are set too high. They should be changed to read some punctuation and not read most punctuation.

The following photo is of a hot air balloon. It is fully inflated, rising into the light blue sky with the flame which provides the hot air to fill the balloon can be seen if one has the eye sight and looks very closely. The balloon has vertical stripes which are yellow, red, white, and black. There is a dark square gondola hanging below the balloon, and has many people inside but they cannot be recognized other than seeing them as silhouettes. This photo was taken at a hot air balloon festival right in front of the Philadelphia Art Museum. As a person who had low vision when I took this photo, I could have never seen if the flame was shooting up or not. I decided to stay quiet and listen for the sound the machine would make as the fire roared when the flame was shooting up into the balloon. When I heard that sound, I took this photo.

The following photo is one I took when I hired a driver to take me high into the Rocky Mountains. The driver took me to see this tree which is said to be one of the oldest trees in the Rockies. I got out of the jeep and felt the bark and found it twisted and turned around as it went up. There were no braches I could feel as they did not start until about 20 feet up the trunk. The bark was light brown and was not hard or rough. The leaves on the top of the tree which run from left to right, were too high for me to feel so I might describe them to you. In  the background of this photo are more of the range of the Rockies. This was taken somewhere between the summer of 1990 and 1991. 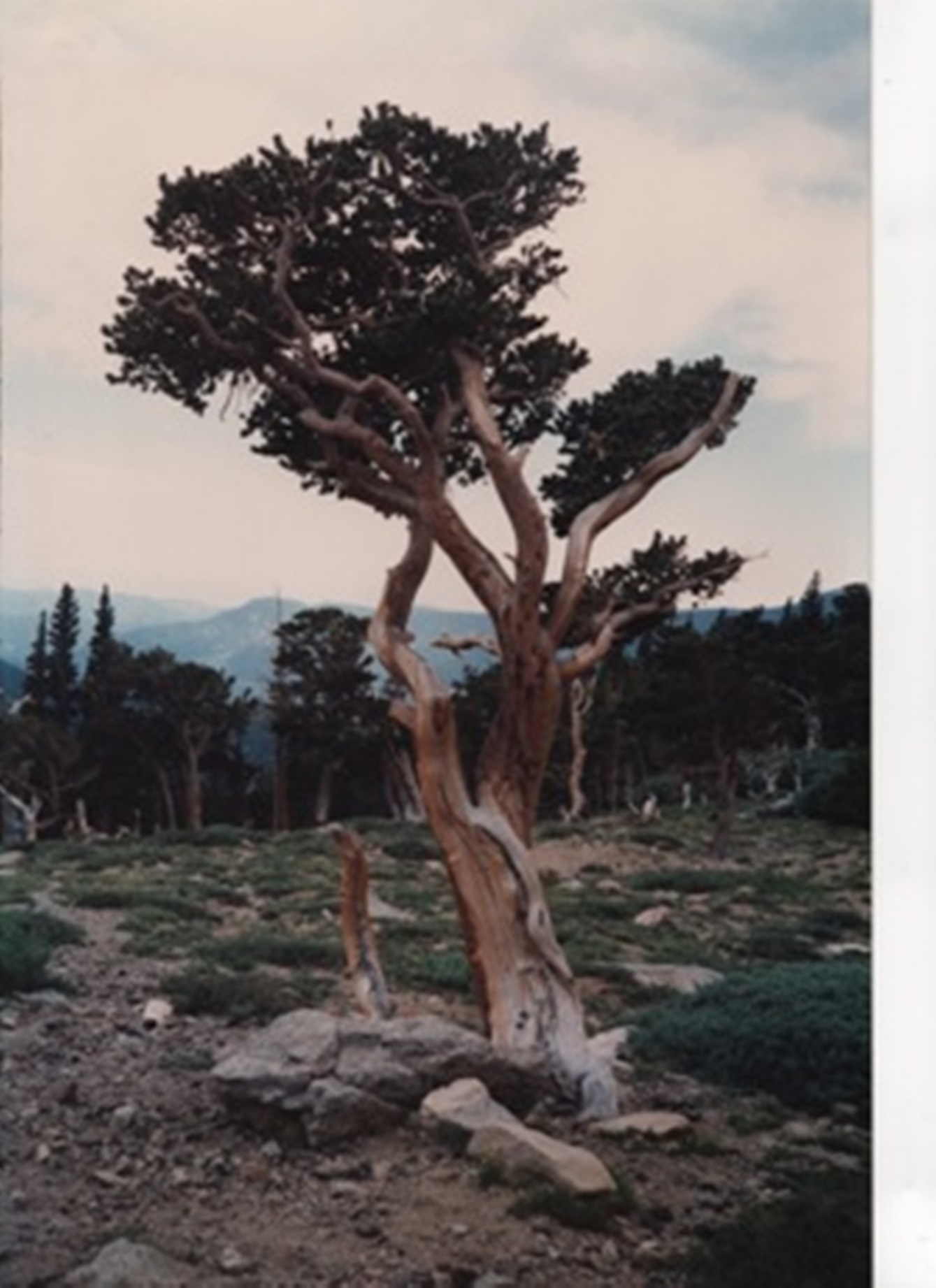 The next photo is one I took with a driver I hired to take me to parts of the Rocky Mountains which are less visited. This photowas shot on top of one of the mountains in mid summer. There is a pond of water in the forground which had to be the clearest water I have ever seen. The green plants that were growing beneath the surface were as easy to see as they would be if about the wter. The tips of the mountains that surrounded the place we stood had both snow on them yet rocks could easily be seen as well. The sky was so clear and blue it near brought tears to my eyes. All this while breathing in the crisp air which was free from the palutants below. The mountain itseld had no name, at least, none known by my driver.